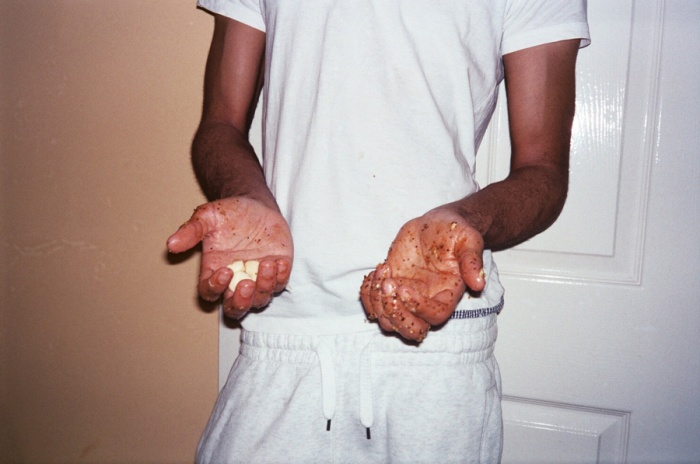 Refusal and Other Essential Strategies

TalkSeePhotography’s Incubator events are a public platform where emerging writers and makers of photography can present their ideas alongside a nominated speaker within their chosen field. Following an open call for applications throughout the summer we are pleased to present the last in our winter 2017-18 series of Incubator events with a presentation by Camara Taylor. The responder to this event will be Alberta Whittle.

Camara Taylor is a burnt out artist and programmer based in Glasgow. With a practice that is methodologically situated within a framework of practising refusal and a tentative engagement with tidalectics (as defined by Barbadian poet Kamau Brathwaite), Camara will present a body of work which spill and flow from photography into, text, sound works, workshops, events, publications and  zine collections. Together with Creative Lab February resident Alberta Whittle whose focus is radical self care, Camara will through their practice reflect upon issues around refusal, body as technologies of self care, under representation of PoC artists and tidalectics as methodologies of making, living and resisting.

Whittle and Camara’s earlier collaborations as co curators, their explorations representation and the nature of the Creative Lab residency the conversations may take on unexpected forms. We are more than delighted to have the opportunity to present two artists in conversation.

Camara Taylor and Alberta Whittle are based in Glasgow.

Alberta Whittle’s creative practice is informed by diasporic conversation and working collectively towards radical self-love. Alberta considers radical self-love a key method in decolonization for PoC to battle anti-blackness. Her practice involves choreographing interactive installations, interventions and performances as site-specific artworks in public and private spaces. Performance has begun to provide important moments for negotiating reciprocity, coercing and demanding that audiences participate in their own discomfort. Often insisting on some level of audience participation, Alberta’s performances attempt to reveal our complicity with systems of oppression, systems, which we often choose not to see or acknowledge.

Underpinning her research is encouraging linkages between active collective unknowing/unlearning and decolonization through activating new ways of rethinking relationships to the past, present and future, based on unraveling concepts of history and memory. Key to these processes of unknowing and unlearning is working collectively in collaborative networks. Foregrounding these conversations is an analysis of creative strategies employed to question the authority of postcolonial power, its implications and its legacy.

Since 2016, Alberta has been a Committee Member of Transmission Gallery in Glasgow, where her curatorial research looks at the need to decolonise public art institutions. Alberta is a freelance journalist and her critical writing has been published in Visual Culture in Britain, Visual Studies, Art South Africa and Critical Arts Academic Journal.

Camara Taylor’s is a person based in Glasgow. In 2017, they were a recipient of a Glasgow Visual Arts & Maker Award and commissioned by The Gallow Gate, Glasgow to present Flourish, an exhibition of ideas in progress. Camara is a committee member at Transmission Gallery and a programme facilitator for the Race, Rights and Sovereignty series, a partnership between GSA Public Lectures and the Glasgow School of Art’s Students’ Association. They are also a participant in Constellations, an artist working group programme conceived by UP Projects in collaboration with FTHo. In 2018, Camara will be focusing on a collaborative publishing project and present new work alongside Zoé Schreiber and Ewan Mitchell, in Roadmaps, supported by Glasgow International.

TalkSeePhotography is held at the Centre for Contemporary Art

Join Us at TalkSeePhotography Events

TalkSeePhotography is a Greenhouse for photography in Scotland. It is organised and exists for anyone with an interest in the medium.

You can email us on talkseephotography@gmail.com